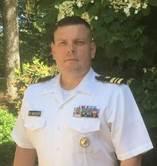 LCDR Brewster is originally from Tennessee and joined the Marine Corps Reserve as a Combat Engineer directly out of high school and then graduated from the United States Naval Academy in May 2000.  His primary designator was as a Human Resources Officer.  His duty stations included Tennessee, Virginia, Maryland, Rhode Island, Texas, California, and Germany.  While in Germany, he supported ODESSEY DAWN as the lead Human Resources Planner.  He served as the Executive Officer of Naval Operational Support Center, Houston, TX, and his last duty station was as the Force Manpower Officer for Surface Forces U.S. Pacific Fleet.  He retired from the Navy in January 2019 and has been the Senior Naval Science Instructor at Bridgeport Military Academy since April 2019.  LCDR Brewster teaches Naval Science 1, 3, and 4 and is the lead for Color Guard, Athletic, and Academic Teams at BMA.

He can be reached via email at tbrewster@bridgeportedu.net.